Kiefer blinks several lazy times before his iris dilate in the darkness that grips at his sides. Suddenly his world heaves forward and arches upwards as it begins to spins in an uneasy twisting movement while the silence slowly finds itself drowned out by distorted reverberations of a guitar being strummed. With a whimsical expression on his face, his eyelids fall heavily over his glassy stare as the music sends him comfortably off to sleep, but as a smile softly grows across his lips a sharp note cuts through the peacefulness and his bloodshot eyes shoot open with abject horror.

A woman grips his hand tightly, as he stares in disoriented rage around the room, staring into faces of people he knows he should somehow know, but their names and identities don’t reveal themselves to him.

“K-Kiefer, i-it’s okay, we’re all here for you just like you wanted us to, just like a r-real family,” she says as she looks to the others and then back to him, tears streaming down her cheeks.

“W-W-What’s bloody wrong with you!” he scoffs as he pulls his hand away from her, and stares with a twisted nose towards the others. “And w-what the BLOODY HELL a-a-are you all s-staring at! C-Can’t a man die alone in peace?”

She reaches out for him again, trying to grab his hands while he tries in vain to avoid her. “You lost that right long ago old man, haven’t you heard the news?”

“BAH TO THE NEWS!” he bellows as he throws his arms in the air and brushes her hands away once more. “C-Can’t you see the TRUTH! C-Can’t you see through their LIES! I’m already dead, they’re just keeping me alive until I haven’t any strength left to fight the demons away!” he spits with venomous intent, while a thick froth forms in the corners of his mouth.

“AWAY WITH YOU!” he bellows.

One of the men launches themselves  to their feet and sticks his chest out as a frown cuts itself across his lips. “SEE! SEE! I TOLD YOU THIS WAS A MISTAKE!” he shouts as he points a thrusting finger towards Kiefer. “I KNEW HE COULDN’T CHANGE, NOT EVEN ON HIS DEATH BED! NOT YOU! SHIT CAN BE COVERED AND BURIED, BUT IT’S STILL FUCKING SHIT!”

“S-SEBASTIAN!” She snaps, as she casts a deathly glance towards him.”Remember why we’re here!” she hisses through clenched teeth as she turns back to Kiefer, and grips his hand tightly once more while Sebastian throws himself back into his seat, gruffly folding his arms across his chest.

“I-I-I, I d-don’t k-know you p-people! W-W-Who in the g-god damn hell are y-you, and why a-are you s-stopping me from DYING!” he says with wide panicked eyes, as Fiona’s grip tightens and a wry grin slowly creeps onto her lips.

“Look harder Kiefer. Look into the eyes of us all, and tell each one of us that you don’t know who we are! Tell us you have forgotten your victims, because we sure as SHIT haven’t forgotten you?” She snarls through rotten teeth.

“F-Fiona?” he stammers as she gently nods her head.

“There you go,” she says smugly.

“A minute ago you wanted to just die in peace, and now you’re not ready to go, make up your mind!” Sebastian playfully.

“I-I-I, I wanna go back!” Kiefer quips quickly as tears well up in his eyes as he stares around the room at the all too familiar faces. “I DON’T WANNA DIE! I DON’T WANNA DIE!” he screams as he suddenly finds himself standing a few feet away from his motionless body as it lies strapped down on the execution table, as the warden fells once more for a pulse.

“Time of death,” the warden says as he looks up at Kiefer and grins. “NOW!” he snarls as everything goes black.

Follow the link below to purchase A Twisted Halloween 2021 and read the remaining 30 short stories. 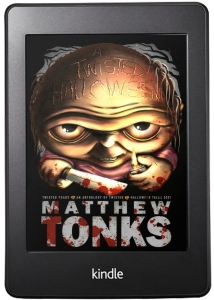 As you read these words, know that you have already taken the last step of your journey towards the wickedness we bring you.
So wait no longer, compete the phase and open OUR pages of insanity.
Allow the finality of all things be complete, and in doing so you will allow these moments, these characters, these short glimpses that are collected here for you to witness seep inside all you are.