The axe slices through the piece of wood, sending two even pieces tumbling to the ground. He rubs his hands together, before tightly hugging himself, she laughs as she places another piece on the tree stump she’s using as a chopping block.

“Don’t avoid the question, it’s like this, first you say you want to be a partner, and now, you say you don’t, which is it? Because Watson wants this sorted by the end of the day, so, once you make a choice, its permanent.”

“I told you, no, I told you that when you called me last week, I told you that when you emailed me two days ago, and I’ll tell you one more time, I’m not interested. Watson can go to hell for all I care, and you can too, I’m done with all that shit, I just want to be left alone, out here, and hopefully get some sleep,” she says as she swings the axe, sending it powerfully through the piece of wood.

“You know he’s not going to be satisfied with that answer, why don’t you come back home, back to the city, and we can talk this out, we, I-I don’t want to lose you.”

She laughs, “Peter, you’re so sweet, but I’m not coming back, I’m not taking the position, and we, we never had anything between us, that night, that one moment of weakness,” she says as she places another piece of wood on its end and raises the axe, looking him dead in the eyes. “That night was a mistake!” She says as she swings the axe swiftly through the air and strikes the piece of wood, splitting it in half.

“Don’t be like that,” he says as he steps towards her while she sets another piece of wood up, as she raises the axe he places a photo on it, her eyes widen and she looks at him, he stands there with a smug smile on his face. “I think you need to reassess your answer.” She swings the axe, diverting her aim at the last moment and it strikes him in the stomach, he screams in pain and falls to his knees, looking up at her as she raises the axe above her head.

“Oh Peter, I’m tired. So please, shut the fucking hell up!” She yells as she brings the axe down upon his head, the blade tears it’s way into skull and he drops instantly to the ground, in a quivering, bloody heap. She places a boot on his shoulder as leverage as she tries to pull the axe free, the coldness of the steel against her throat instantly makes her stop in her tracks, she feels his warm breath on the back of her neck.

“Hello Kathryn, nice to see you haven’t lost your touch.”

“Hello Watson, I’ve been waiting for you,” she says with a smile.

You can read the original version HERE. 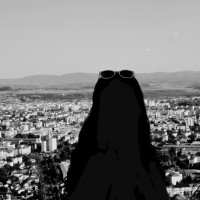