Wade wrestles the blade away from Lance and drives it up into his chest. They stare into each other’s eyes for several fleeting moments, then Wade pulls the blade free, sending Lance to the floor.

“LANCE! NO!” Cara yells as she rushes forward, only to have Wade tackle her to the ground. She wriggles and struggles trying to free herself, as Lance stares coldly towards them, his life seeping from within, and forming beneath his body in the form of a bloody puddle. Desperately she reaches out for him, only to have Wade pin her to the floor and force her face towards Lance.

“Watch the light leave his body through those eyes you used to love staring into, and know you did that. If you hadn’t of pushed him, he wouldn’t be lying there dying. This is what it looks like when you love someone, so get used to it!” Wade hisses into her ear with a callous grin upon his face.

“You threatened my very existence, did you think I’d just sit back and let you win!” she screams with renewed vigour, as she tries to free herself once more.

“I didn’t threaten shit, I just wanted what was mine!” he hisses as she drives an elbow into his jaw and sends him spiralling off her. In what an outsider would consider a perfectly coordinated routine, they both scramble to their feet and circle each other in dance off fashion.

“I never took what wasn’t free for the taking, and you showed no care until it was no longer there to be abused. So don’t treat me as if I am the bad guy here, you’re the one who’s at fault.”

Wade tightens his grip on the blade and sneers. “I may have become complacent, but I never stop caring for what I had. You’re an infection that’s overstayed it’s welcome, I tried to cure you, I tried to starve you out, I even cut you out, but yet you still live.”

She smiles a mouthful of rotten teeth, and runs her tongue across her lips, leaving a trail of green mucus along them. “You can’t kill what I am, all you can do is know that my existence is your fault!” she hisses.

“That’s the spirit, you know there’s only one true way for all this to end, and it’s my wa….” she doesn’t get to finish her words as a shot rings out, interrupting her flow. They stand there in silence, staring at each other.

“W-W-What have you done?” she whispers.

“A-A-All yo-you let me,” Wade says as he drops to his knees, followed moments later by Cara, as she mirrors Wade’s movements, like a carefully coordinated dance routine…

Follow the below link to purchase 2020 Book One to read all 20 five minute short stories. 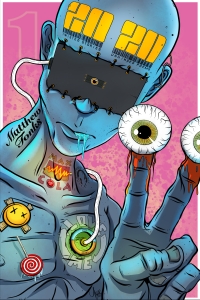 Before you lies a piece of a puzzle far grander than you could ever know or imagine. For scrawled in blood upon the pages hidden within the above tome is stories twisted twenty in all, soaked in the embers of my insanity. Five minutes to glimpse inside the eyes of someone new, five minutes to answer, five minutes to sin, five minutes to do almost anything. A god, a demon, a harlot, a whore. A fascist, a killer, a sinner, a door. Death and division, humanity askew. A belfry of bats, a sea of black cats, so many moments out there to see, so many things you could see with me. So take a seat beside me and call it voodoo, because now you ride with me too…