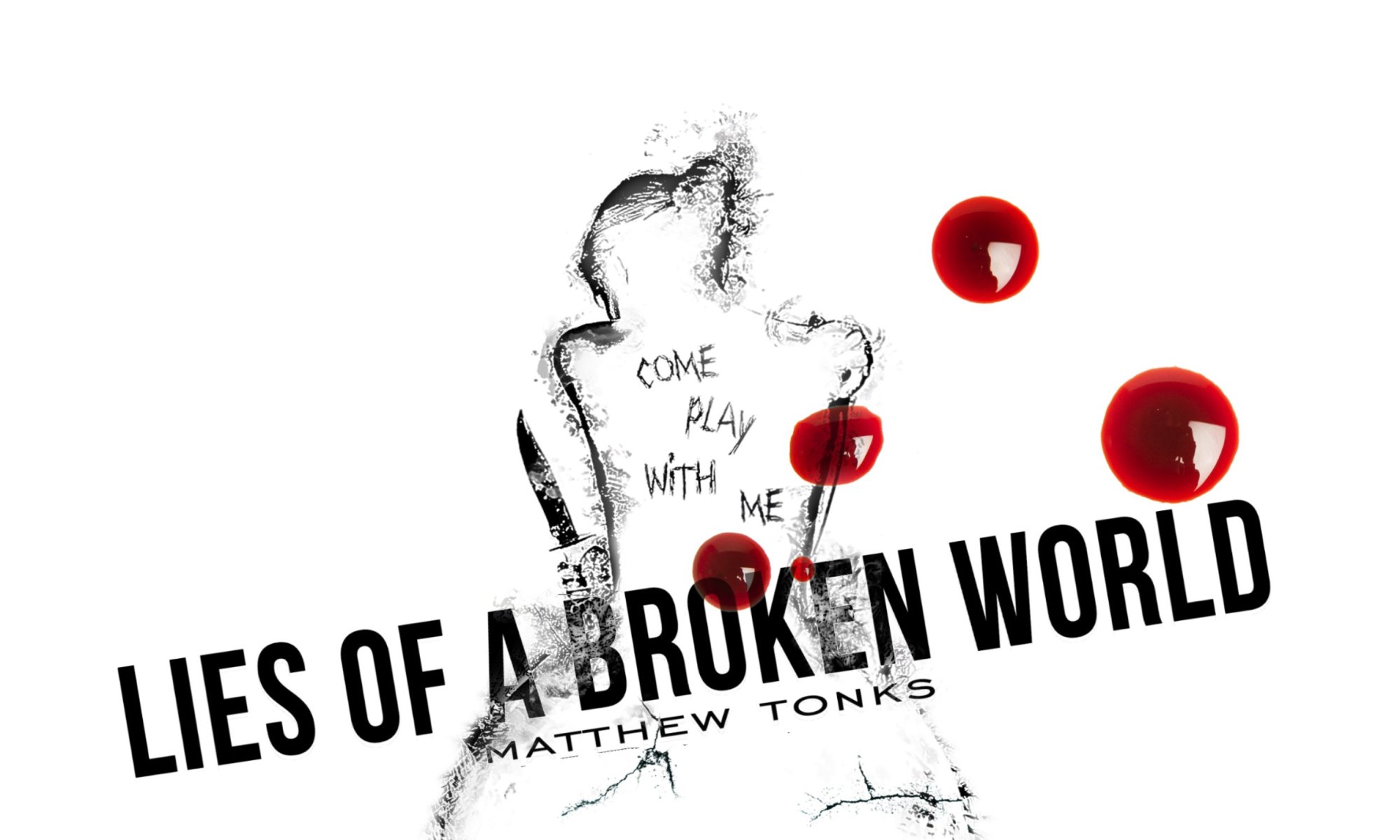 Milwaukee Park, normally a safe haven for children and their families, but today the park is nothing less than a danger warning to everyone that life is not all fun and games. Gary makes his way through the police barrier, out of the corner of his eye he spots several news cameras and lets out a groan of displeasure.

“Detective Inspector, can you give us any comments on the murders that have taken place over the last six hours?” Mandy Holmes from Channel Thirty-One yells from out of the crowd.

Gary stop and turns around and shields his eyes from the camera lights, “As you can see Miss Holmes, I’ve just arrived on the scene, so right now I know nothing more than you, but, if I need to use you for anything, I’ll call. So why don’t you follow your usual procedure and give Jones a blow job out the back and I’m sure he’ll tell you everything you need to know,” Gary says and continues towards the large tent that covers the crime scene as the camera man receives a stiff punch in the arm from Mandy for laughing.

Gary walks through and is instantly greeted by a sight he cannot take back, before him are the mutilated bodies of four children, his stomach churns for the first time in what seems like forever, he is sickened.

“Fuck me Danny, please tell me you’ve got something?”

“We’ve got multiple samples from all the children but nothing clean has come back on the field gear, whoever did this left plenty of clues but we won’t know what we’ve got until we get it all back to the lab so I can run more extensive tests, regardless we will have the fuckers name and address to you in the next three hours, I can promise you that,” Danny replies as he gets to his feet. “They were just fucking kid’s Gary, what kind of demented psycho does this to kids?”

“There are lots of twisted fucks in this world Danny, we seem to see more and more of them as the days go on,” Gary replies, he stands there and looks over the crime scene, his face begins to show his puzzlement.

“Does anything about this hit you as strange?”

“The way they’re laid out, I mean the attack doesn’t look frenzied, it looks easy, at a scene like this you’d expect to be able to feel the fear these kids felt before they died, you should be able to see some sort of a struggle, but, it’s all just too neat. Were they killed here or dumped?” Gary asks as he bends down over one of the bodies.

“They haven’t been moved, the blood indicates they died where they fell, there’s no way the bodies have been moved.”

“What’s the white powder around their lips and nose?”

“Not sure yet, I’ve got a sample being run through trace, my first thought was MercuryFour, but that shit’s been off the market for a while now, but I’ll have something for you once we pack up and get back to the lab.”

“MercuryFour? That doesn’t sound good for any of us, I’ll leave you to finish up,” Gary says as he heads out of the tent and towards the second crime scene a few meters away.

“Tell me these two are linked?” Gary asks Sarah Bouon, Forensic Coroner Second Class who is in charge of the scene.

“No,” Sarah replies quickly. “The Zerker’s were enraged by the time they finished with Washington and attacked the officers, from what Danny has told me about the bodies he is dealing with, the Zerker’s could’ve never pull off something so neat and clean in the state they were in.”

“So two different crime scenes meters apart, but no connection, must be my lucky day, I’m so thankful Bill decided to lumber me with both of these.”

“If it makes you feel any better, this one is cut and dry. Tests confirm Big Palco, his DNA is all over the place, fucking pig.”

“I’ll head downtown and find Mister Palco and his Aces,” Gary says as he heads off towards his AC-Stinger.

“Anything to say now, Detective Inspector?” Mandy calls out, Gary climbs on his bike ignoring Mandy’s request. “Jackson, our viewers have a right to know what’s happening in their city?”

‘Fucking pariah!’ Gary slams on his helmet as his commline comes to life.

“Don’t tell me you’ve got another body for me to deal with tonight?”

“No, your case load is full enough right now, but I do need you at my office sometime within the next two hours,” Gleeson says.

“Can it wait? I’ve got a few leads to follow on the Washington case, looks like The Aces are involved.”

“You can’t keep ignoring me son, what happened with Hallowthorpe, we have to talk about it sooner or later.”

“Do we? I made a call, and it was the right one as far as I’m concerned, I could only get to one.”

“I made a call, a call that worked out for your friends in high places, with Hallowthorpe gone they have control, so why the fuss over it all?”

“It wasn’t your call to make son, you should’ve at least contacted me, we could’ve made the decision together instead of you taking that burden on yourself, regardless of ‘my friends in high places,’ as you call them.”

“There’s no burden Bill, is that all? Can I get back to work?”

“No, I still need you to come in and see me, it’s unrelated, and son, the sooner this is handled, the better, The Aces can wait.”

“Two hours,” Gleeson replies as he disconnects the commline.

“Fuck,” Gary mutters as he takes off towards downtown.

Gary brings his AC-Stinger to a halt outside the bar ‘One in the Chamber’ a known Zerker’s safe zone and The Aces favorite hang out. He runs a quick inspection on his blaster before he places it back in its holster and grabs a syringe from a compartment on the bike and stuffs it in his jacket and storms into the bar.

“Fuck off Jackson,” The man behind the bar yells out.

“I love you too Vaughn,” Gary replies. “I don’t want any trouble, I’m only here for Big Palco, you give him to me and we can both have an easier afternoon.”

“Bullshit Vaughn, I said I didn’t want any trouble, remember what happened last time you wasted my time with your lying?”

“I remember, that’s why I’ve upgraded my security since you were here last,” Vaughn replies as two big hands grab Gary by the head and fling him into the wall, Gary crashes to the floor, stunned but not unconscious.

“Seriously, you got yourself a fucking hulk?” Gary says as he tries to free his blaster, the Zerker grabs Gary once again and slams him into the wall again, holding him against it. Vaughn walks proudly over to them, not attempting to hide his smile.

“Like I said Jackson, I haven’t seen Big Palco, and even if I did, I wouldn’t tell you. You might have the law behind you, but I fear the Zerker’s more than the law,” Vaughn says. “Take him out the back, and make sure he doesn’t bother anyone again, ever.”

The Zerker grunts his understanding and carries Gary towards the exit, a shot rips through the Zerker’s head that sends him crashing backwards, Gary drops to the floor and gives Vaughn a deathly look, and he smiles, smoke rising from the chamber of his blaster, Vaughn meets Gary’s gaze with fear.

“Where do we go from here?”

“To hell,” a voice says from behind him, Gary spins around to face Big Palco as he punches the button on his chest.

“Fuck,” Gary says as he goes flying through the air and into the other side of the bar, crashing to the ground in a bloody heap from a punch from Palco’s massive right hand.

“You wanted me blue, well here I am, come get me!”

“I already have,” Gary replies with a splutter of blood.

“What?” Palco replies, “FUCK!” he yells as he sees a syringe poking out of his stomach.

“You really think I’d come into this fight with the idea of it being fair, knowing you would just go punching that fucking death button of yours?” Gary says as he forces himself to his feet. Nitro is a chemical, and like all chemicals there is always a way to cancel out the effects, R-Four-D-One-One-Two-Four is the chemical enemy of Nitro in every possible way. First and foremost it stops Nitro’s effects in a matter of seconds, for the user it sadly has side effects, the most damning is mass muscle deterioration of all of the bodies enhanced muscles. And that was happening to Big Palco at this very moment, within seconds he was totally disabled and at Gary’s mercy.

“Date night’s over Palco,” Gary says as he smashes Palco across the face with a thunderous right hook and follows it up with a powerful left upper cut, sending the incapacitated Palco to the ground, unconscious.

Gary initialises his commline, “This is Jackson, I have suspect Big Palco in custody, send a meat wagon to my current location, I’ll await your arrival.”

“Affirmative Detective Inspector, a meat wagon is on its way.“

“Right, now where were we?” Gary says as he turns his attention back to Vaughn.

END OF ACT I

words of a wayward clown