This takes place after chapter one of The Roundhead and before chapter two.

“That’s total bullshit, I like to read, but this is bullshit,” he yells as he tosses his tablet on the bed and quickly rushes to the toilet. “Are you listening to me?” he yells out.

“No, I’m ignoring you because you’re just ranting again.”

“Ranting? Seriously? Have you even read this shit?”

“I don’t need to, you read half of it to me already, and it sounded okay by the way, but your running commentary ruined it.”

He flushes the toilet and sticks his head out of the doorway, “What? My commentary would’ve made it. I swear to god, the next time I come across some wannabe Stephen King, I’m going to pass. I can’t wait to talk about this on the show tonight.”

“What, you’re going to talk about it on the show?”

“Of course, why do you recon I read it all the way through?”

“But don’t you think that will defeat the purpose of you disliking it?”

“Well, if you go and talk about it on air, won’t that get people interested in reading it? And thus, possibly putting yourself in the firing line of those same people if they enjoy it?”

“No one’s going to like this piece of shit, honey, no one.”

He walks out of the bathroom and picks his tablet back up from the bed, “Let’s see, I’ll throw the challenge out to my listeners to read the story before the show starts, then we’ll see who’s right and who’s wrong,” He says as he opens up a new post and beings typing away.

“I think you’re only going to embarrass yourself, it’s been liked and shared by a few million people already, and that tells me it must be at least okay.”

“Fuck them, and anyway, maybe it might help the show get bigger rating tonight,” he says with a smile, as he tosses the tablet back onto the bed once more.

“You shifty fucker,” she says as he jumps onto the bed with her.

“Honey, I’m all about the listeners,” he says with a smile as they kiss, the lights in the bedroom begin to flicker and flash, exploding around them, followed by silence.

“What the fuck?” she says as she pushes him away.

“Fuses don’t blow fucking lights like that, maybe a power sur-r-r-r……” she screams as a pale, boy stands at the foot of the bed, his eyes black pools of nothingness, they both leap up and he quickly grabs a baseball bat from beside the bed, holding it up towards the boy, while she clutches his shoulder, taking shelter behind him.

“What the fuck do you want?” he yells

“Tonight it comes to take you in, to cover you soul with its sin, it slithers its way across the night, burning the world with its light, it calls for blood, it calls for you, and you’ll fear its name, before the night is through!” and then he flickers like a waning candle, and, then, is gone, leaving them both standing there terrified. Neither move for a minute or more before she begins screaming, and tumbles backwards, through the on-suite door and smashes her head on the toilet, he frantically reaches out for her, but, his attention is drawn behind him, as he hears a low, inhuman gurgling noise coming from the darkness of the room. He scans the darkness several times before he finally sees it, as it moves forward, towards him. His eyes, wide with fright, watch its distorted, unnatural movements as it steps closer, and closer towards him. His nostrils burn, as its stench wafts into his face, he feels the contents of his stomach surge from within and out onto the floor, as the beast now stands before him.

“I am the beast underneath your bed, I am the thing that will devour your soul, I am what you called forth when you shared my sin, I am death,” it says in a deep, gravelly voice, like fingernails along a black board. It’s dark, black, soulless eyes stare at him, it’s teeth, sharp, and plentiful, it’s jaw, strong, and its form large and powerful.

“P-P—Please,” he sods and falls to his knees. “Please,” he says softly once more as it lunges forward and grabs his head in one of its huge hands, and squeezes.

You can read the original 50 Word Story here, I’d be interested in what you think of the full story that came from the short. 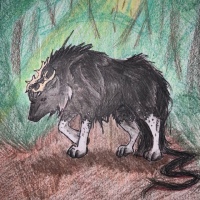