Who said it was easy,

making decisions that are more than they should be,

why must one decide to sell all,

just to have something,

isn’t there something that can negate the negativity,

who we are meant to be,

burying who we were. 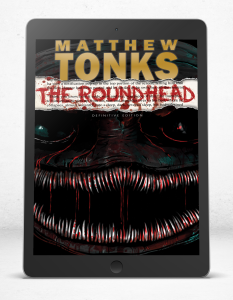 Marty Towns didn’t know the story you’re about to read, a story he believed he had written, would free an ancient evil that was trapped just outside the edge of our reality. An evil born, without sin, without a soul, that hungers for ours to fuel its one desire, vengeance on he who imprisoned it. As each victim falls, they rise again as the beasts dark herald, diseased by its touch, forced to foretell of its coming to the next who shares its words, the next to feel its cold embrace.

And as the world struggles to survive against the beasts path of destruction, another battle is fought, in-between the words of the story, on another plane of existence, and it will be this battle that will decide who survives.

Will you become the next victim of,

The Complete Blog Version Of The Roundhead, Including All Preludes and Poems.

The Dagan – A Bonus Short Story Inspired By The Roundhead.

Facing Your Fears – Original Concept-Art By Yazgar. (paperback only)

DON’T MISS OUT ON THE FULLY FLESHED OUT VERSION OF THE SHORT STORY, THAT SCARED THE SHIT OUT OF READERS!

Available to buy in ebook or paperback format from Amazon HERE, (please make sure your geographical location is set to your country so you can purchase a copy) as well as all other ebook suppliers.

For further information on all current, and future releases, pop over to the upcoming release page.