“I’d rather believe in NOTHING, than to believe in something that doesn’t make SENSE!” Froud spits venomously, while clumsily removing Shaun’s league jacket before thrusting it into the ground.

“H-HEY!” Shaun bellows with eyes wide and arms held out to the side in protest.

“WHAT?” Froud remarks with pointed finger, “YOU HAD YOUR CHANCE TO SAY SOMETHING ABOUT IT, BUT YOU CHOSE NOT TO! YOU CHOSE TO STAND WITH THE OTHERS! NOW I DON’T GIVE A FUCK WHAT YOU THINK!”

“IT’S ONLY NOT WHAT YOU SAID, BECAUSE YOU SAID NOTHING!” he spits as he shapes up to the beefier Shaun, looking him dead in the eye with hate filled ones of his own.

“YOU CALLING ME A LIAR AS WELL NOW?”

“I-I-If that’s w-what i….” He doesn’t get to finish his words before Froud smashes him across the face with a closed fist, knocking him to the ground in a heap.

Shaun clutches his jaw in his hand and grinds it from side to side while a wry smile paints itself across his crimson red lips. “Hell of a whack you have there, pity it’s wasted on you.”

“Many people could say many things,” Douglas says as he places the barrel of a gun to the back of Froud’s skull. “But none of them would ever be right.”

“I was wondering when you would show up.” Froud says as he raises his hands into the air. “Surprised you haven’t pulled the trigger yet.”

“Too many people have died today, old friend…”

“I guess I deserved that, harsh as it may be, but know this, I am not here to threaten anyone’s existence, I just want a chance to survive, a chance to be with my brother and his family.”

“You trying to be funny?”

“HE’S TRYING TO GIVE YOU A FUCKING CHANCE!”

“A chance to what? Betray who I am? Betray the people who count on me, to be me? No, FUCK your chances, and FUCK YOU! I ain’t vouching for this piece of shit, not after what he did to Tammy and Leah. He can rot out here for all I CARE!”

“How about making a compromise, one that achieves what we want while keeping your hands clean, and the breath in your lungs?”

“THERE’S NO WAY OF C….” He doesn’t get to finish his words as a deafening blast tears its way though his skull and explodes out his eye. For a second he stands there uneasily, before dropping like a rag doll to the ground.

“W-W-W-WHAT DID YOU DO!” Shaun screams as he scrambles over to Froud’s side, cupping his crumpled form in his arms. “T-T-THIS WASN’T W-W-WHAT WE PLANNED! T-T-THIS WASN’T THE PLAN!”

“Plans sometimes have change Shaun. Your boyfriend was never going to play along with what I wanted, and to let him live would’ve spoiled everything I’d set in motion. So, to protect my plans, he had to die,” Douglas says as he raises the pistol towards Shaun. “Just as you do, but know your sacrifice is for the good of my survival!”

Douglas winks at him, “It’s all about the theatrics, for you, for me, and for them,” Douglas says as he tosses the gun towards Shuan, and dives to the ground with his hands over his head screaming inaudible words.

Shaun catches the gun and juggles it in his hands as a small group descends upon them.

“W-W-What?” Shuan stammers, as he looks up in surprise at the group as they come into view, the gun now firmly in his hands. “I-I-I, I..” But his words are cut short, as they gun him down.

Follow the below link to purchase A Twisted Kiss On New Year’s Eve 2022 and read all 31 five minute short stories. 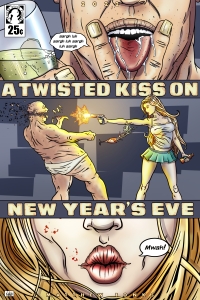