“Well I’ll be hogtied, it’s Danny Long Legs!” he says as a twinkle glimmers in his eyes and a soft smile draws itself across his wrinkled lips as he looks over the photograph that Clare passed him.

“Yup! We used to sing songs about him when we were kids, not that D-Danny Long Legs w-was his real name, it’s just what we called him back in the day on account of his long legs.” Harry says as he hands the photo back to Marilyn with a shaking hand. “To be true I don’t think I ever knew his real name, but he can’t be your guy because Danny’d be dead by now, so I’m sorry you made the trip all the way up here.”

Clare looks down at the photo and bites her bottom lip, then looks up at Harry once again. “What if I told you this photo was taken last week.”

Harry looks at her a chuckles softly, “I’d still say it’s not Danny, he looked like that when I was a kid, so maybe he’s a grand child, or some close cousin, but there’s no way it’d be Danny for that to be him, he’d need to be at least a hundred and fifty years old, and lady time I heard that’s impossible, not looking like that anyway.”

“B-But what if it was him, what he was even older than one-hundred and fifty years, or even two-hundred! What then?”

“Then I’d be telling you that you’re the one that needs to be in one of these places instead of me.” he scoffs as he thrusts a thumb over his shoulder with a playful wink.

“T-Tell me about the song you used to s-sing as a k-kid?” she asks nervously.

“It was just a song, the kind kids sing to make fun of other kids.” he grunts as he forces himself to his feet uneasily. ”It won’t solve any mysteries for you Clare, it’ll just open new ones, so stop looking for answers in the past, because they ain’t there. Now if you don’t mind, I-I-I, I have to have my afternoon nap, you’ll understand you’re my age,” he says as he turns and shuffles away.

“I knew he’d come back one day! I-I-I, I told Duncan, I told him that he was just sleeping, that he wasn’t really dead.” Harry says excitedly as he scrambles back and snatches the photo from her hands. “Was this taken down at the old mill, or at the toy factory?”

She stares at him for a few moments, almost dumb founded by the questions as her bottom lip trembles and her gaze moves past him.

He slaps her across the arm with the photo, “Come on girl, don’t come all this way and get my hopes up just to clam up in the end game. Where is the devil?”

“I-I-I, I never sh-should’ve c-come, I-I-I, I led him to you,” she says as she looks at Harry, terror written across her face. “T-T-The so-song, I-it wasn’t the k-kids who sang it, w-was it?” she asks nervously, but she needed wait for Harry to answer as the light flicker and a raspy voice starts singing. “Danny, Danny, crawling on the wall. Danny, Danny, taller than tall. Danny, Danny, under your bed. Danny, Danny, he’ll make you dead!” 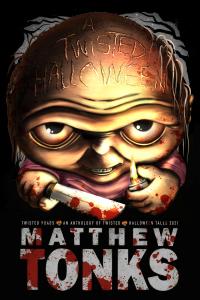